You are here: Home > Resources > The Belbin Blog > Belbin Observer Assessment 2017 Election: The Results Are In!

Do you want an Idealist or a Pragmatist as your Prime Minister?

Do you want an Idealist or a Pragmatist as your Prime Minister?

We asked you to complete Belbin Observer Assessments for the Prime Minister, Theresa May (Conservative), Jeremy Corbyn (leader of the Labour Party) and Tim Farron (leader of the Liberal Democrats). We had over a hundred responses, and the results are now in...

You see Theresa May as a result-oriented pragmatist.

Hard-driving, competitive, tough and confrontational, Theresa May is the quintessential Shaper, with the practicality and discipline of an Implementer. This combination means she’s seen as task-focused: she knows there’s a job to be done, and she wants to get on with it.

New ideas and strategies don’t feature highly in her profile, so she’s perhaps more suited to run an existing system rather than to create something new. According to you, hers is a leadership style which places action as more important than relationships.

What does she say? Where is the proof?

In the recent televised question-and-answer on Channel 4, May spoke of “challenges” to society and focused on “negotiating hard” and delivering stability for Britain. “There’s more work to do,” she said.

As an Implementer, it wasn’t surprising that May claimed it was “down to your talents and hard work how far you go”. In discussing Britain’s negotiations for leaving the European Union – her focus was on having a plan and following it through:

“It is important that we get that best possible deal, as it underpins so much of what we want to do and we can only get that deal if we’ve got a plan to go in there and really stand up for Britain. Negotiations will start eleven days after election day, so we have to know what we’re doing, we have to have a strong hand in the negotiations and be very clear about getting the best possible deal for Britain.”

And the Shaper? May has been described as a ‘bloody difficult woman’. Her response?

Your Observer Responses - Theresa May's most frequently ticked words were:

Looking at the Observed Team Role Strengths and Weaknesses (one of our favourite pages of the Belbin Report) we get a real picture of the balance - are there any areas where the weaknesses are threatening to counterbalance the strengths?

Using all the available data, Theresa May's Belbin Team Roles in a ranked order are:

You see Jeremy Corbyn as an ideas man and a visionary.

Caring, free-thinking and consultative, Jeremy Corbyn shows Co-ordinator, Plant and Teamworker tendencies. This combination implies someone who has ideas for how things should be and wants to listen and bring others along with him.

So what’s lacking? Corbyn isn’t task-focused, and this, combined with a low score for Monitor Evaluator, might mean that he has difficulty translating his ideas into practical action plans.

What does he say?

At the same Q&A on Channel 4, Corbyn spoke of “intelligent engagement with the rest of the world” – a Plant/Co-ordinator/Teamworker phrase if ever we heard one! His focus was on listening to others and valuing what they have to say. His idea of leadership? “To me, leadership is as much about using this [he pointed to his ear] as using this [he pointed to his mouth]”.

As a visionary would, he described his manifesto as “transformational” and a collaborative effort: “We wrote this manifesto […] by consensus within the Labour party” and a number of groups “who have very important views to communicate to us”.

And when faced with a question from audience member, John, as to whether he personally could make a strong leader, Corbyn responded as a Teamworker would, bringing leadership to an individual level:

“I’m sure when John and I get to know each other, we’ll get along fine. We’ll get to like each other, I’m sure we will. John, people have perceptions about each other, but do you know what? In life, I meet lots of people – some I agree with, some I disagree with, some I profoundly disagree with. But I always want to get to know them. Because everybody I meet and everybody you meet knows something we don’t know. You should never be so high and mighty you can’t listen to someone else and learn something from them.”

Your Observer Responses - Jeremy Corbyn's most frequently ticked words were:

And his Observed Team Role Strengths and Weaknesses? 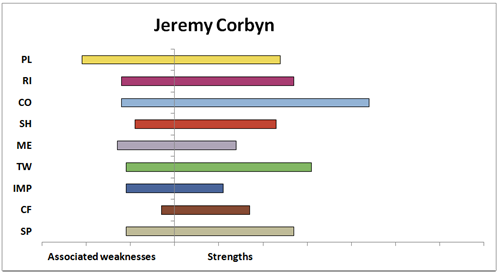 Which gives him a Team Role profile of:

Which looks almost like the reverse of Theresa May!

You thought Farron was caring, broad in outlook and dedicated to subject, like Corbyn, but also competitive and challenging like Theresa May. Farron’s Team Role combination implies a tenacious individual who can make the most of opportunities arising, and values interaction with others.

Like Corbyn, Farron seems to be lacking Monitor Evaluator, Implementer and Completer Finisher – the Team Roles needed to ensure that plans have been sense-checked and will work in practice.

What does he say?

At the BBC leader’s debate, Farron employed the open, informal style you might expect from a Resource Investigator. His social roles were in evidence as he claimed that “economics is about people, it’s not about figures” and expressed the desire for “a country where people are decent to one another”.

He spoke of “being compassionate to the individual and standing up for them, but we also have to get the big choices right” – a statement showing Teamworker, Shaper and Co-ordinator in action.

He focused throughout the debate on the absence of Theresa May – that’s seizing an opportunity and using to advantage, alright. And challenging? Certainly.

“Good leaders don’t run away from a debate. Theresa May undoubtedly should be here. Whatever we’ve discussed this evening, her absence is undoubtedly the shadow that hangs over this election. How dare you call a general election, then run away from the debate?” Farron's 4th top Observer Word was ‘seizing opportunities’. He was seizing the opportunity to mention Theresa May was not there!

Your Observer Responses - Tim Farron's most frequently ticked words were:

And his Observed Team Role Strengths and Weaknesses? 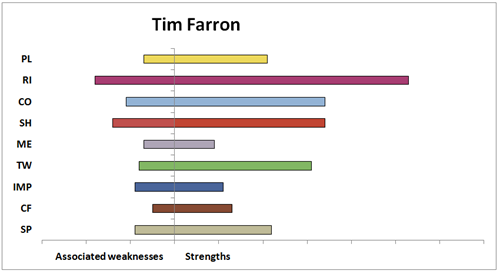 Which gives him a Team Role profile of:

Which is more of an amalgam of May and Corbyn!

So what have we learned? Whatever your political persuasions you pretty much agree that Theresa May wants to run a steady ship, whereas Jeremy Corbyn wants to bring his ideals into government coupled with a chance to be called “a man who cares” (after all, caring was his top Observer word). And Tim Farron? He is challenging the status quo with opportunistic thinking.

For more details on Belbin - maybe you would like to find out whether you are more of a May, Corbyn or Farron - go to: http://www.belbin.com/about/belbin-reports/

Footnote - Belbin is not affiliated to, nor promoting, any individual or political party. The Team Role information shown is based on the views of our customers and followers on social media. The profiles shown are not official or endorsed by the individuals named.