You are here: Home > Resources > The Belbin Blog > Not with a bang, but with a whimper

Not with a bang, but with a whimper

Three breakdowns in working relationships and how to fix them

It isn’t always palms on desks in the conference room or raised voices at the water cooler. Often relationships at work can fail quietly. Two people might simply avoid one another without any outward signs that anything is wrong. It may not be obvious to any but the most observant of colleagues, or when it becomes apparent that work has suffered as a result.

Our response to relationship breakdown at work can be governed by our Belbin Team Role behaviours. Whilst those with Shaper amongst their top roles are more likely to confront others openly, those with Teamworker tendencies would do almost anything to avoid conflict, and are more likely to accommodate others at the expense of their own wishes.

There are pros and cons to each approach, of course. The Shaper way lets everyone know where they stand, but might create a bad atmosphere if the tension cannot be easily resolved. Avoiding confrontation in the first instance might allow the time needed to devise a more subtle strategy to address the issue at hand. However, there is a risk that difficult interpersonal problems are simply swept under the rug.

The Belbin Working Relationship Report is ideal for analysing a working pair in terms of Belbin Team Roles. Once each person has completed a Belbin Individual Report, the data can be combined to demonstrate the similarities and differences in their Team Role approach, pinpointing potential sources of conflict and identifying areas for discussion. 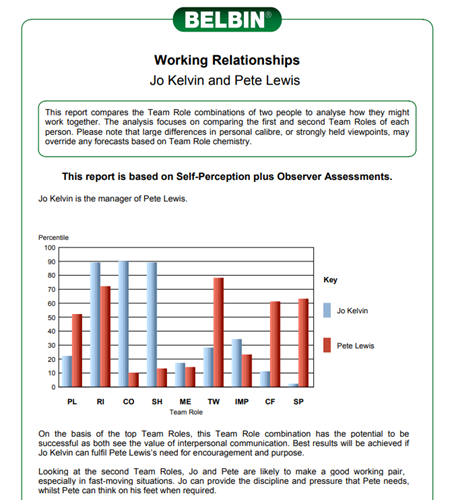 The general rule of thumb is that those with complementary Belbin Team Roles tend to work well together, especially if there is some area of common ground in their behaviours. In the example above, Jo Kelvin’s drive and eye to the bigger picture are likely to work well alongside Pete Lewis’ supportive nature and detail focus. What’s more, with Resource Investigator tendencies in common, they’ll share enthusiasm in new projects and enjoy exploring new options for their project.

But what happens if things don’t work out so neatly? In order to establish relationships of any kind, we need to find something to like. But what if all we can see is exactly what we don’t like about the way someone else operates?

In our first scenario of relationship failure, two people decide that there isn’t enough common ground between them. Even without knowing one another’s Team Roles explicitly, they might have detected a difference in approach or priorities that feels insurmountable or not worth their time and energy.

For a high-scoring Resource Investigator, the Completer Finisher’s unrelenting insistence on pinning down every last detail might feel tiresome and draining. For the Completer Finisher, the Resource Investigator’s enthusiasm without apparent substance might be fanciful and unnerving. Failing to see the value of the other’s contribution, each does their best to ignore the other.

But those very ‘weaknesses’ offer clues as to strengths. Plants are preoccupied because they are devoting their energies to the creative process. Specialists are focused on their own area because that’s how they hone their expertise. Implementers resist change because change hinders efficiency. And so it goes on. Once the corresponding strength has been identified and understood, the irritating counterpart is perhaps more palatable.

And if the corresponding strength is not present – or not pronounced enough to justify the weakness – then we have a language with which to begin addressing that problem.

In the second scenario, the working relationship may have been working well, up to a point. Whether or not the bad experience falls within the bounds of Belbin Team Role behaviours, we can use that language to attempt a repair.

"When there is trust, conflict becomes nothing but the pursuit of truth, an attempt to find the best possible answer."

An able facilitator might explore the particular incident with both parties, using Team Role language to depersonalise the conflict. It might be explained that one played the Shaper and made the final decision before the other (a strong Monitor Evaluator) had been given time to reflect and advise. The first was anxious to move things along, whilst the second felt their position to be undermined. The first step towards a solution can be as simple as articulating our styles clearly. For the high Monitor Evaluator, this would mean saying, “I need time to arrive at a decision, and I become disengaged when I’m not consulted”. For the high Shaper, this would mean saying, “There comes a point when discussion needs to make way for action. I’m always keenly aware of that deadline.”

With this in mind – and with a greater understanding of the dynamics of the working relationship – the terms of the new ‘relationship contract’ can be negotiated.

Just as relationships can fail because of a lack of common ground, it’s also possible to have too great an overlap when it comes to our behavioural preferences. In our third example, colleagues who are Specialists in the same field might find plenty to talk about, sharing professional insights and discoveries. However, when brought in to work on the same project, the same pairing might find themselves competing over the same Team Role territory.

There are several questions to consider in this case. The first is of team composition. How thoughtfully was the team put together? Does the team need two Specialists in the same area? By aggregating data from the Individual Reports, a Belbin Team Report can help establish the gaps and overlaps present in the team, enabling managers to decide who is needed and when. If two ‘similar’ (in Belbin terms) people are needed, how can work be delegated so that the role of each is clearly defined and to prevent misunderstandings?

The last possibility – if both individuals are needed in the team for structural or logistical reasons – is for one person to make a Team Role sacrifice. In addition to our preferred roles (the roles we play most readily), we also have a number of manageable roles, those behaviours we can call upon if needed, and cultivate for the team’s benefit. This is known as making a Team Role sacrifice, but can also be to our own benefit, as we uncover new skills which might not otherwise be brought to the fore.

However, playing other than to our strengths for a long period of time can be a strain. As Dr Belbin says, ‘Moving from a natural role into a secondary role is like changing gear. That shift may make you feel as though the vehicle is not going at the speed for which it was designed’.

As such, Team Role sacrifice may be appropriate for the duration of a project, but shouldn’t be considered as an effective strategy long term.

Are there ‘silent fails’ in your team?

Maybe it’s time to find out. Why not check out our full suite of Belbin Reports. For more complex situations, we recommend a bespoke conflict workshop conducted by one our experienced Belbin facilitators.

Here’s how to handle difficult people. Here’s more about Team Role sacrifice and finding new skills. Or why not discover how Xerox helped bring together two teams in conflict for a new product launch?

Now is a great time to spend time understanding how you work as a team. We can facilitate bespoke virtual / hybrid or face to face Belbin workshops for you at all levels from board to new recruits.