You are here: Home > Resources > The Belbin Blog > Teams at the top - senior leadership and when 'to team'

Teams at the top - senior leadership and when 'to team'

According to our recent survey, almost a quarter of our customers use Belbin at the most senior levels within their organization. With 97% of clients agreeing that Belbin helps teams work more effectively together, where do the two meet? How does teamwork operate at the top and what can be done to improve things?

The words of Jon R. Katzenbach in ‘The Myth of the Top Management Team’ were published more than twenty years ago – and they still resonate today. Katzenbach asserted that so-called ‘top teams’ aren’t really teams at all – that they don’t have any of the features needed to make an effective team, and describing them as such can do considerable harm.

The word ‘team’ has acquired a great deal of baggage from colloquial use. With all the meanings it carries, its currency as shorthand to pinpoint a concept – which, after all, is what language is – loses value.

Does the nomenclature really matter? Yes, it does:

The article points out that teamwork is not synonymous with performance. For a lot of senior leadership interactions, it might not be the most effective approach. Rather, the skill for effective leaders lies in determining when teamworking is and is not appropriate.

So, what makes an effective team?

According to Belbin, an effective team is one in which: 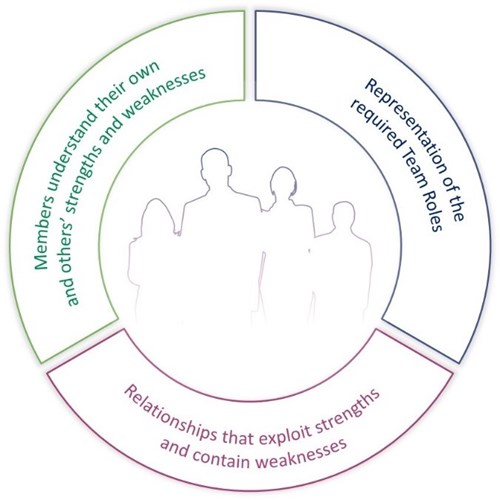 A collection of top-level executives in any organization is not a team at all. They’re effectively a working group with a single leader.

In Management Teams: Why They Succeed or Fail, Meredith Belbin writes: “The bigger the group, the greater the unseen pressures that make for conformity.” Where there is structure, this discourages dissent. Where structure is lacking, the sheer size of a group leads to anonymity. In a group of executives whose primary responsibilities lie beyond the working group (as we’ll explore below), this means that commitment to the ‘top team’ will most likely take second place.

There are a number of requirements for high-performing teams that a working group of high-level executives can’t meet.

Teams need to be small.

Dr Belbin’s ideal team size is four. This allows for all required Team Role contributions to be represented (since each team member has more than one role to offer) and means that decisions must be reached by consensus. (With five in a team, one person might be given a casting vote.)

Teams must be able to set tangible goals.

The objectives for a group of executives (corporate strategy, policy and objectives) are more abstract than for teams operating at lower levels, who can focus more tightly on specific performance outcomes. With goals too broad to offer the focus or mutual accountability that constitutes real team effort, goal-setting for the ‘top team’ can prove a fruitless exercise for result-driven executives.

Teams should be balanced in their composition.

The qualities that lead to promotion may be exactly the opposite of those required for effective teamworking. Top-level executives are chosen because their skills and experience have shown that they are proficient and dealing with their own primary responsibilities. However, it’s exactly those responsibilities which will always take precedence over so-called ‘top team’ work, especially if that ‘team’ is not cohesive.

Additionally, complementarity is not guaranteed. Belbin theory stipulates that a balance of Team Roles – or behavioural contributions – is needed to ensure effective team performance. A ‘top team’, however, is not composed with balance in mind, but is a collection of individuals at a certain hierarchical level within the organization. Whilst they might bring a number of skills, judgment and experience, there is no guarantee that these will be complementary, especially if corporate ‘cloning’ has led to the promotion of executives with a certain behavioural fingerprint. In this instance, an executive group may not be alert to their Team Role shortcomings, or if aware, may be unable to draw on their reports for Team Role resources they are lacking.

In a typical hierarchical structure, individual accountability – the ability to take responsibility, make critical decisions and exercise power – is valued. With a view that this alone leads to high performance (and an individual track record to prove it), many single leaders are conditioned to work this way and likely to be distrustful of sharing accountability with others.

Whilst senior executives may be tempted to view the working group with a single leader as the more effective route, ‘wise leaders’, writes Katzenbach, ‘recognize the inherent values of both behaviours’ – strong executive leadership and true team performance – and decide which is appropriate in a given situation.

He suggests asking the following questions:

1. Can the team identify a tangible result that the team – using all its skills – can achieve, which couldn’t be achieved by group members working alone?

2. Does the leadership role need to shift? Real teams ‘boost their leadership capacity by changing leadership depending on the task at hand.

3. Which is more important to achieve the objective – individual or mutual accountability? Executives are used to being held accountable for whatever happens on their watch. In a team, by contrast, everyone holds everyone else accountable.

Belbin claims that different Team Roles, or behaviours, are required at each stage of a project, in order to achieve success. Exploring a team’s Team Role requirements for a particular task can offer leads as to who should be involved and may assist with determining suitable leadership at each point: 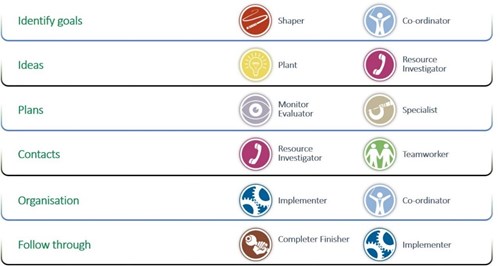 How to set a team up for success

Having made the decision to take the time to get real team performance is worthwhile, senior executives must

1. Choose individuals based on their mix of skills (suitability, in Belbin terms), rather than job title, qualifications or experience (which we call eligibility). For example, two software developers might hold the same degree and be given the same professional training, but if their Team Role approach to the work is very different, this can have a significant impact on how they contribute to the team and interact with others. A strong Monitor Evaluator might be called in to offer a strategic eye at the planning stages, whist an Implementer-Completer Finisher could be relied upon to implement a solution which has already been agreed.

2. Allow the leadership role to shift, letting different individuals lead at certain times. As well as providing the most effective team leadership, this can help develop individuals and build the organization’s overall leadership capacity. Whilst senior executives might be accustomed to their own leadership style, the team approach gives them a chance to become better acquainted with other ways of leading. According to Belbin theory, each Team Role comes with a different leadership style. Discovering the Belbin roles in your team not only helps to distinguish who might be bested suited to lead each stage, but can also help others in the team to understand what to expect of different leadership styles and how to adapt to maximize team performance.

As Dr Belbin says: “Simply putting together a number of people and expecting them to work as a team is not enough.” Whilst real teamwork has the potential for efficacy that far exceeds individual endeavour, ‘team’ can be a misleading label too, especially at the highest levels of organization. Approaching teamwork as a panacea can foster complacency, precluding an understanding of the dynamics that make teams work. It is up to leaders to reclaim the word ‘team’ and take active decisions that ensure collective success.

Jon R. Katzenbach, The Myth of the Top Management Team