The Belbin Job Comparison Report analyses the demands for a particular functional role alongside the attributes of an individual being considered for the job, to determine their suitability – perfect when recruiting or for assessment centres.

Sometimes, potential new recruits can look good "on paper" – they possess all the qualifications and experience required – but turn out to be unsuccessful in the role, for less tangible reasons.

This typical recruitment scenario can occur because we focus on eligibility (hard skills and everything else that can be recorded on a CV) but neglect to consider suitability – the individual's behavioural styles, and how these stack up against the characteristics required in the role.

Similarly, an incumbent in a role might not be performing as expected, because there is a fundamental mismatch between their Belbin styles and the line manager's expectations for the role.

The Belbin Job Requirements Inventory asks managers to describe jobs in terms of the behavioural demands they make and produce the Job Report. The Belbin Job Comparison Report works by comparing the Team Role data about the job with that from the individual's Self-Perception responses, to analyse how well a particular individual's Team Role preferences might fit with the demands of the job. If Observer Assessments have been completed for both individual and job, the match in behavioural attributes can be studied in a little more depth. 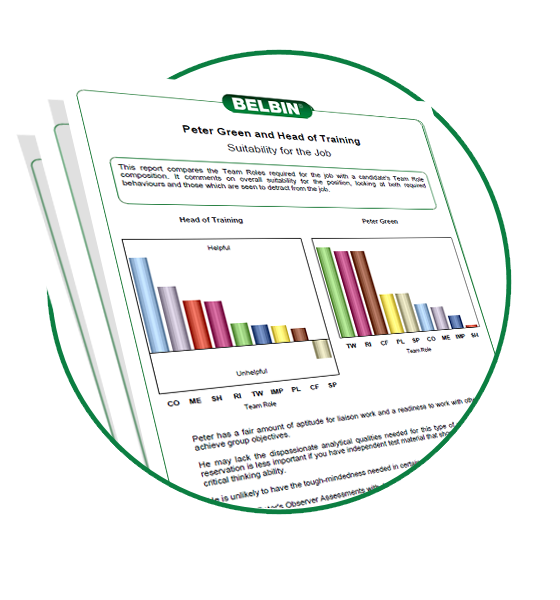 The Belbin Job Comparison Report analyses the demands for a particular functional role alongside the attributes of an individual being considered for the job, to determine their suitability – perfect when recruiting or for assessment centres.

What can I use the Job Comparison Report for?

Please note: the Belbin Job Comparison Report is a tool to prompt fruitful thinking and discussion. It should never be used as the sole basis for decision-making.

How can I get a Belbin Job Comparison Report?

The Job Comparison Report compares an individual’s Team Roles with those of the job, so we need two sets of Belbin data: