You are here: Home > About > Dr. Meredith Belbin

Dr Meredith Belbin originally identified the Team Roles as part of a unique study of teams that took place at Henley Business School which included a business simulation game. In 1969, Dr Belbin was invited to use this business game as a starting point for a study of team behaviour. 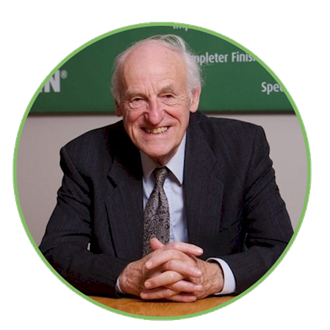 Meredith Belbin was thirteen years of age when the Second World War broke out. Living in an area that became known as “Bomb” Alley in Sevenoaks, Meredith refused to be evacuated with his mother and sisters, preferring to continue with his education at the Royal Grammar School in High Wycombe, where he was already receiving glowing reports from the headmaster. Meredith suggests that the theme of playing to one’s strengths and managing weaknesses came to the fore even at this early age, with his poor performance in Mathematics being mitigated by excellence in Latin.

By 1945, it was difficult to attain a place at Oxford or Cambridge, as many were being reserved for ex-servicemen. Nevertheless, with an essay Dr Belbin modestly describes as “high-grade waffle”, he went up to study Classics at Clare College, Cambridge.

After a couple of years, Meredith began to tire of his subject, viewing an impending career as a classics teacher as a rather unpalatable option. Never one for keeping to convention, Meredith began to branch out and read about anthropology and economics, tucking himself away for hours at a time at the world-renowned University Library at Cambridge.

After some consideration, he switched courses to Psychology, completing a two-year course in half the allotted time. It was here that he met Eunice, who would later become his wife. Eunice was reading psychology at Girton College. Meredith remembers contriving to partner her in a tennis match in order to catch her eye and, a year later, the two were married. Shortly afterwards, Meredith began studying for his PhD, focusing on the Psychology of Ageing in Industry.

From Theory to Practice

Following his doctorate, Meredith was invited to take a research fellowship at Cranfield College (now Cranfield School of Management) to continue his study of older workers in industry. As part of his work, he went into over a hundred companies, studying how work patterns change with age. In particular, he remembers how older workers disliked “pacing”, the method of finishing a task on a production line within a given period of time. Where older workers could be rewarded for accuracy rather than speed of work, job satisfaction was higher.

Eunice Belbin was working as a director at the Industrial Training Research Unit (ITRU), a government-funded body set up as a result of the Industrial Training Act. Meredith combined his work at Cranfield with consultancy for the Organisation for Economic Co-operation and Development (OECD). This took him all over the world wherever the question of older people in industry arose. In the USA, he worked with the US Department of Labor, integrating underprivileged members of the community whose talents would otherwise have gone to waste. Meredith found that many suffered from low self-esteem but, once they found a niche, derived great satisfaction from making contribution at work. He persuaded companies to take on individuals for free “work experience”, pioneering a concept which is now commonplace. Once firms found a good worker, it was an easy next step to paid work.

ITRU and the research at Henley

Whilst Meredith was working at the ITRU, he was invited to carry out research at what was then called the Administrative Staff College at Henley-on-Thames. Having an interest in group and individual behaviour, Meredith and Eunice, along with Bill Hartston (a mathematician and international chess master), Jeanne Fisher (an anthropologist) and Roger Mottram (an occupational psychologist) began planning a research project to study management teams in action.

Together, the research team selected managers from a number of organisations, who completed a battery of psychometric tests: some well-known, others derived by Meredith himself. The team conducted three business games a year, with eight teams in each game. During each game, observers methodically recorded different interactions and contributions from the players, which were scrutinised and categorised after the event. The research formed the basis from which Team Role theory would spring, although its significance was not fully recognised at the time.

In Australia, Meredith worked with colleagues studying intellectual abilities and teamworking. With a guiding principle of building on success and understanding the reasons for failure, Meredith continued to put research into practice, breaking down the bureaucracy and policy which hampered organisations and focusing on giving individuals opportunities commensurate with their abilities and interests. In 1981, Meredith Belbin expounded Team Role theory in his seminal book, “Management Teams: Why They Succeed or Fail”. The book was later named as one of the top fifty management books of all time.

Meredith worked for ICI Paints and Cadbury’s Schweppes, reporting on how well individuals might be suited to a particular job, for the purposes of recruitment and selection. By the late 1980s, Meredith found that demand was well outstripping supply and he was forced to work into the night to write the reports required by hand.

In 1988, Meredith, Eunice and their son, Nigel, formed Belbin Associates to help promote Belbin Team Roles around the world. In 1993, Meredith published “Team Roles at Work”, which provided more practical applications for Team Role theory in the workplace. Ever since, Belbin Associates has gone from strength to strength, with distributors spreading the Team Role message to individuals and organisations all over the world.