You are here: Home > Resources > Hire for behaviour, train for knowledge: the key to better engagement and retention

Belbin in recruitment - hire for behaviour, train for knowledge

The most qualified workers are less engaged

In 'The State of the Global Workplace', Gallup reports:

“In the US and Canada, engagement rates trend downward slightly with employees' higher levels of educational attainment […] In both countries, college-educated workers are less likely than those with a high school education only to strongly agree with the statement: 'At work, I have the opportunity to do what I do best every day'."

This raises the question...

Why is someone who is recruited for their specific skills or qualifications not able to do what they do best?

Anyone who has encountered career guidance software at school or college will know that prescribing careers based on qualifications and hard skills alone frequently produces unpredictable results.

Yet often, job descriptions are drawn up with only these factors in mind.

At Belbin, we take a different approach

During his extensive research into teams and experience in industry, Dr. Meredith Belbin defined two separate elements in the recruitment and selection process: "eligibility" and "suitability".

Certain patterns emerged when he observed the role of hard skills and behavioural inclinations in matching people to jobs: 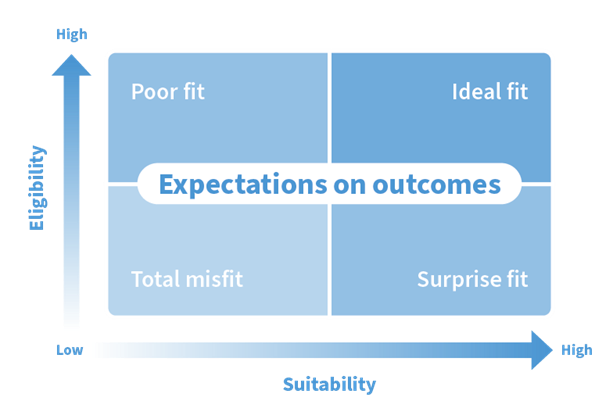 Those who were neither eligible nor suitable tended to acknowledge the fact and move on.

Those who possessed the qualifications but not the behavioural tendencies often became stuck. They were frequently defensive and resentful of having to leave a job for which they were qualified on paper, but unable to fulfil the role due to other factors which hadn't been taken into consideration during the recruitment process.

Those who possessed both the qualifications and the appropriate behaviours for the job would seem to be an ideal fit. However, Meredith found that they didn't tend to last long in the job. Since there was no real challenge or learning curve, these candidates would often see the role as a stepping-stone and move on to greener pastures.

Those who lacked hard skills but possessed the right behaviours tended to fit best with the job. Unlike the 'ideal fits', they saw new challenges and opportunities for development.

In other words, Meredith surmised that not only did eligibility fail to guarantee a good fit with the job, but that it could actually preclude it. Managers, unwilling to confront appropriately-qualified candidates with the idea of unsuitability, often chose to let sleeping dogs lie.

People can train to learn new skills, so long as there is sufficient interest, aptitude and motivation

However, we tend to overvalue those candidates who already possess the hard skills we seek and overlook "semi-eligibles": those who, with training and experience in the job, could last longer in the role, become valuable contributors and gain more fulfilment from it.

Performing 'in role' (as far as Team Roles are concerned) provides a confidence boost, whilst identifying training needs – and crucially, providing the necessary training – allows individuals to grow in the role. 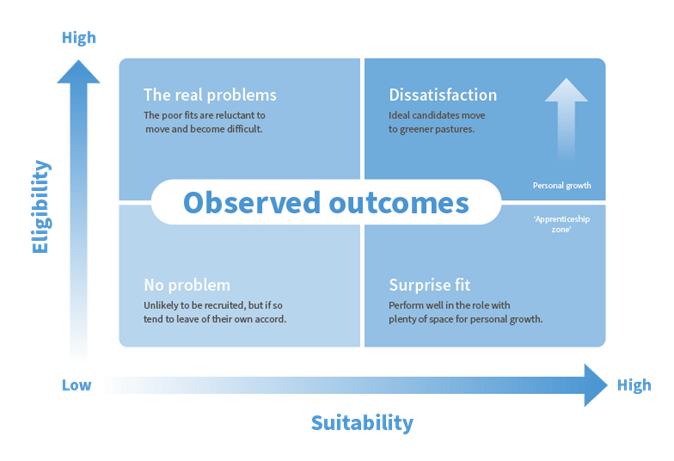 "Indigenous talent, discovered in this way, usually plants deeper roots and develops more loyalty to the organisation. Success comes about through combining Team Role strengths with the provision of suitable opportunity." - Meredith Belbin

We all have 'manageable' Team Roles – behaviours we can cultivate to help us fulfil a particular role. However, substantial changes in Team Role behaviour are rare. And according to Dr Belbin's findings, an unsuitable candidate never provides the ideal fit between person and job, regardless of how good that person may look on paper.

If someone isn't performing in a given job, it's worth asking whether they might be better suited to a different functional role within the organisation.

Bob Penney, CEO of Mercatius Ltd uses Belbin extensively for recruitment. He observes that, when it comes to the eligibility-suitability matrix,

‘When someone reaches the top right-hand corner, you either make the square bigger, or move them to a new square’.

Belbin reports are designed to facilitate and inform decision-making in recruitment, as part of a rich and full process.

Whilst they do not provide a definitive 'yes' or 'no' (of course, each organisation's recruitment process is far too complex and nuanced for that), they offer an additional source of information, as well as guidance and advice on how to ask the right questions to establish Team Role fit.

Contact us today to find out how Belbin can help you move towards a more impartial, strengths-based recruitment strategy.

Our thanks to Bob Penney for his contribution to this article.