We're often asked this question. The answer is: if you've received your Belbin reports, your work is just beginning!

Strengths-based learning and working are never 'done'. And Belbin is a language that should be used whenever people are working together.

"The merits of a team should never be assessed without first considering its purpose. There is little point attempting to build a team or rate an existing team’s performance unless it is needed to perform a worthwhile task."

The starting-point for any team is a clear objective. What is the team set up to do and what is it expected to achieve? What are the deadlines, resources available, expectations from stakeholders?

Belbin should be 'done' every time:

Belbin should be 'done' during the debrief and again once the objective has been achieved.

Belbin is 'done' when a manager is looking to get the most out of their team and when they are checking they have given the right work to the right people. Belbin is 'done' whenever the team’s objective changes, when it's time to take another look at the strengths present in the team, and consider how its composition might be altered to better meet its purpose.

Once there is clarity of purpose, the team needs to discuss 'how' they are going to achieve the objective.

Here, Belbin can shed some light on the behaviours at play – the way in which we interact with each other, and with the job at hand.

Once everyone understands their behavioural strengths (which includes feedback from everyone in the team), individuals can gain a bird’s-eye view of the team, discovering important resources amongst their colleagues and raising awareness of potential pitfalls.

For the team to be successful in meeting its objectives, it is key that this common understanding is owned and accepted by all team members, rather than leaving the team leader to pull the strings.

"In many cases teams, not managers, will figure out what the individuals on those teams should be doing and how they are performing."

The Team Role Circle is a simple but effective pictorial representation of the strengths present in the team. 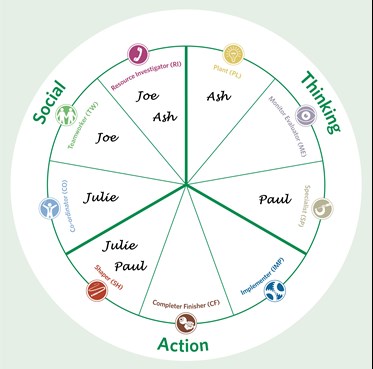 The diagram might give rise to a number of discussions…

Following this conversation, the team can start allocating work to each team member based not only on their skill set, but also on their Belbin contribution.

As the project progresses, Belbin should be used to help depersonalise conversations when relationships prove difficult.

A new person joins the team

Take time to see where they fit.

Remember: the most successful teams have access to all nine Team Role behaviours as and when they are required.

Someone leaves the team

At the end of the project

Everyone needs to debrief: on the work, on the objectives, and on their Belbin contribution.

If someone made a Team Role sacrifice, ensure they get the recognition they deserve, and ask whether they have they discovered a new strength.

And of course, remember to take time to celebrate your success!

Once you've crossed the finish line on a project, why not re-do the Belbin SPI and Observations? After all, unlike our personality, our behaviour isn't fixed. It changes as we experience new ways of working, new people, new cultures and organisations. It's an indication of our growth, and how we learn.

Are you ready to take your next steps with Belbin?

We can help you with the next stage. Get in touch and we’ll talk you through all the options. Whether an L&D or HR professional, a management consultant, or a manager who has some pretty tough objectives for their team to achieve, we have a solution for you.

A senior executive attending a Belbin workshop rediscovered her ambition and devised a personal development strategy to realise it.

Working from the adage, ‘Hire for behaviour; train for knowledge’, we examine how to use the Belbin Job reports to establish the behavioural demands of a job; draw up a job description and more!

Discover the real Belbin. Gain the depth of knowledge and practical tools to position yourself as a certified Belbin expert.