You are here: Home > Resources > The Belbin Blog > What are future-proof skills for the coming age of A.I?

What are future-proof skills for the coming age of A.I?

What are future-proof skills for the coming age of A.I?

In a nutshell, people skills. Why?

Because there are indications that we are entering another age that’s better suited to ‘neo-generalists’, and where adaptive, balanced teams will be essential to leverage innovation and manage disruption. Technology is now evolving on an exponential scale, threatening to leave many of us behind. But we, as humans, still have some useful cards up our sleeve.

Our human ability to interact with one another – to create, reason, use judgement and make decisions – still exceeds that of machines (for the foreseeable future, as the Skynet of Terminator fame isn’t quite self-aware as of yet).

It’s getting harder for us to acquire and maintain hard skills and knowledge that can match the pace of emerging technology. Gone are the days of functioning ‘Da Vinci’ style polymaths who could deploy their genius to master multiple fields of endeavour to high standards. Stephen Hawking has warned of AI’s coming ability to replace many office functions currently performed by humans. Automation has already disrupted manufacturing, and artificial intelligence looks certain to do the same for many forms of office work.

Investment in AI and the development of AI capability are now on the increase, which means that some bigger shocks and scares loom for many established industries.

Risk and complexity will become increasingly common factors as the pace of change of this disruption accelerates. Innovation, in and of itself, will no longer be an assurance of survival in a crowd of other organisations trying to innovate to keep afloat.

We will need to build truly ‘future-proof’ teams that can adapt and survive the coming era of AI and remain in the driver’s seat.

A concept of the coming era has been very well-illustrated by CTO Autodesk’s Jeff Kowalski, and looks at the trends for human talent that have been needed to survive, across the timeline of human working eras.

It considers talent needed from the Hunter-Gatherer era, via Agricultural, Industrial and the current Information age, to the coming ‘Augmented era’ where technology (and the human interfaces with that technology) evolve incredibly quickly.

In short, we have transitioned in terms of the skills required,starting as Hunter-Gatherer generalists needing simple physical strength and speed, to becoming increasingly specialists and hyper-specialists needing to develop specific knowledge and skill to thrive in the current information age.

It seems now, that as the new era dawns, we may need to revert to being what has been dubbed ‘neo-generalists’ – in other words, people who can adapt to increasingly disrupted and complex environments at work.

Specialists will still feature within these teams, but increasingly it will be harder to keep up with AI in terms of the exponential growth of new technology.

Organisations that can harness and target well-balanced teams, in order to embrace disruptive change, will have a competitive edge, and endure. Those who can’t will be in some serious trouble.

Our human ability to problem-find, problem-frame and then problem-solve in teams will hold great value for the foreseeable future.

Organisations will need to Observe, Orient, Decide and Act rapidly to leverage technology as it evolves before their competitors do (one for the fans of Boyd’s O.O.D.A loop there).

Effective balanced teams can adapt far more quickly to emerging situations than poorly composed teams. The consequences of failing to adapt will become more immediate in markets than ever before, as innovation alone won’t be enough to keep pace.

Meredith Belbin, the Father of modern Team Role theory and creator of the famous Belbin Model, asserts that as complexity and risk increase, individuals and groups lack the agility, versatility and balanced diversity to adapt.

In challenging times, as he put it so very well – “Nobody is perfect, but a team can be”. Good teams can better manage the impacts of risk and complexity.

He represents the real need for balanced teams in a world of increasing complexity and risk in this graphic: 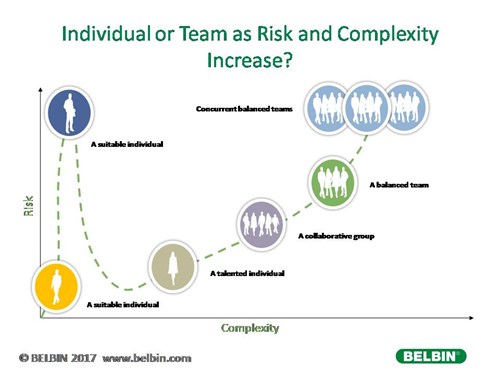 As Google recently discovered with their ‘Project Aristotle’, which sought to define what made their most successful teams tick, it is the very human drivers of ‘psychological safety’ and interpersonal understanding which drive success, no matter how cool the technology.

Even with the very best technology, the ‘people bit’ is still critical.

For us, the Belbin Team Role model has always offered an elegant and sophisticated solution for better developing our people skills. The evidence-based profiles and language provided to explore team strengths and weaknesses enable teams to develop faster, and operate at a higher tempo.

It also enables leaders to better understand themselves, their teams and how external risk and complexity will impact the dynamics of the team.

Understanding the behaviours that enable us to collectively adapt, create and innovate together is more important than ever.

Belbin is ideal ‘human technology’ for the 21st Century where people skills will increasingly begin to stand out as the future-proof skills of the coming age.

How often does your team work on developing these skills? A couple of hours together with the Belbin Reports may be an idea - contact us to find out more; 01223 264975 or [email protected]

Now is a great time to spend time understanding how you work as a team. We can facilitate bespoke virtual / hybrid or face to face Belbin workshops for you at all levels from board to new recruits.