You are here: Home > Resources > The Belbin Blog > Hitting the Mark

We love hearing about the myriad ways Belbin is used in practice.

This case study from our colleague, Anders N. Reichborn, in Norway introduces an innovative and informative way to illustrate how Team Role balance affects a team’s focus, and ultimately, its performance.

Anders and his colleagues were working with a project involving co-operation between units. They had mapped the Belbin Team Roles of all teams across two levels and worked intensively on personal Team Role awareness and team composition.

The group were able to increase their understanding of the resources available to them and learn how to achieve a better balance within each team. However, they discovered some noticeable differences between the cultures of the teams.

Looking for a creative and educational way of moving focus from individual and single team level, to cooperation between them, Anders decided to use a model introduced to him by Mr. Bjoerneby, an HR director of Borregaard Industries, which is a global supplier of performance chemicals. Mr. Bjoerneby was an experienced Belbin user who used ‘The Belbin Arrow’ to demonstrate the need for team balance, and the roles individuals can play within it.

The Belbin Arrow shows the contribution each Team Role behaviour makes to a project.

Innovative Plants and inquisitive Resource Investigators are ideally suited to generating original concepts and taking advantage of new opportunities. They can provide a range of options and ideas for the team to explore.

The Monitor Evaluator can analyse the implications of a given solution and make an impartial assessment of its merits, taking a wide range of factors into account. The Specialist can provide in-depth knowledge about the field which can influence the decision.

As the project progresses, Co-ordinators and Shapers keep things on track, by addressing people and task respectively. They ensure that the team is focused on its goals and objectives, that each person’s talents are being used to best advantage, and that the team will be driven to deliver on time. The diplomatic Teamworkers were able to provide the 'glue' to help the smooth running of the project.

Implementers devise practical plans and carry out the work efficiently, whilst Completer Finishers assure that no mistakes of omission or commission are allowed to slip through the net. They are involved at the ‘sharp’ end of the project, applying the finishing touches.

Putting the Belbin Arrow into practice

Using this model, Anders and his colleagues set about analysing the Team Role composition of two teams. They marked the two strongest Team Roles for each member by filling in the small circles, then used these to apply ‘weight’ to the arrow. Armed with their findings, they gathered two of the teams in the same room.

Team 1 was a very dynamic and lively team. When represented on the arrow model, they were extremely ‘tail heavy’. They generated and evaluated new ideas, but had no means to co-ordinate their efforts or implement their solutions. In other words, they were shooting high into the clouds and had trouble landing a bullseye. 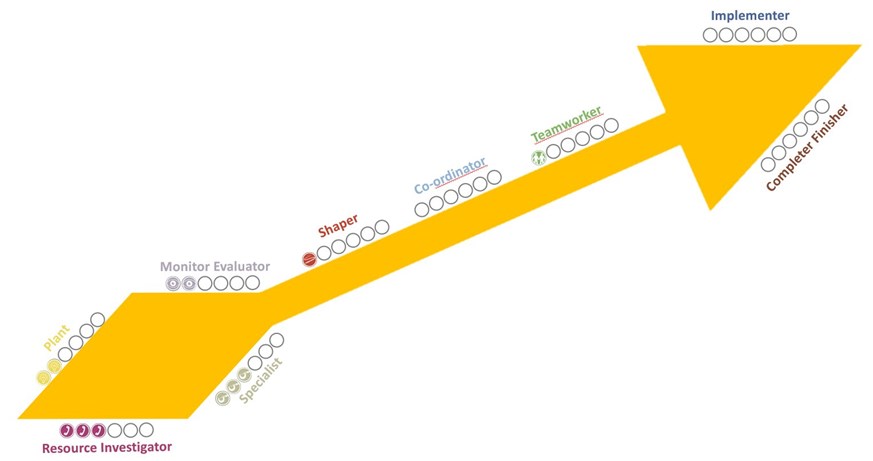 Team 2 was very focused and excelled at digging deep into operational issues and fine details, but had a dearth of original ideas or anyone able to narrow down options through wisdom and expertise. On the arrow, they were very ‘nose heavy’. They were shooting straight towards the ground and had trouble lifting up to view and hit the target. 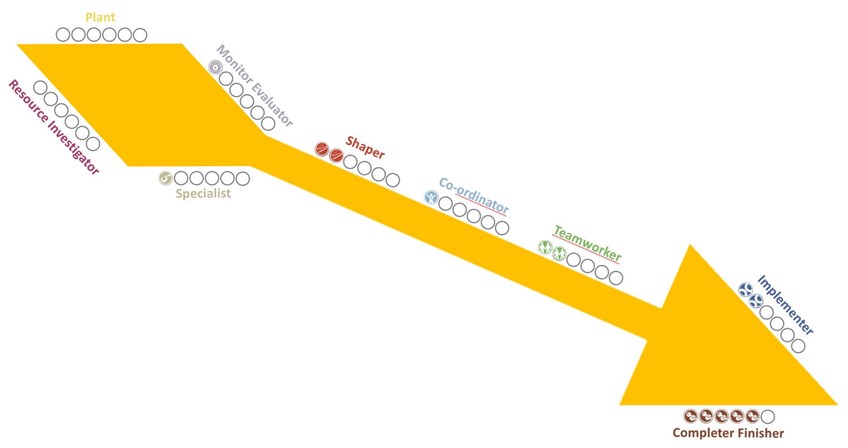 Using the Belbin Arrow model, Anders and his colleagues were able to help each team ‘shoot straight’ – to achieve optimum balance for their purposes; and to gain insight into (and ultimately prevent) further cultural clashes between teams.

Attend a Belbin training course to find out how you can use Belbin to help your team 'shoot straight', or let us come and work with you. Contact us for an informal chat to find the best option for you:  team@belbin.com | 01223 264975

There is so much to be learned on the subject of teams. This is because not only is effective team work powerful, it is also rare. Join our webinar series to find out more.